Want to express your admiration for a politician? Try baking a birthday cake.

Specifically, a Minturn woman, Ruth Jackson, spent a month making and decorating a magnificently tiered cake as a token of her respect for the president.

Jackson, 31, a divorcee with a four-year-old son, worked as a private housekeeper and lived in a boardinghouse just east of Minturn.  She likely was an admirer of the president and his “New Deal” programs intended to spur economic recovery during the Great Depression. Records indicate that her annual income in 1938 was $360. In 1935 her meager income was bolstered by a $10 monthly payment from Eagle County’s “Mother’s Compensation Fund,” a relief program created by the federal government.

The white fruit cake that she baked for Roosevelt’s birthday required 10 dozen eggs and 15 pounds of dried fruit and nuts. The various sized round cake layers collectively weighed over 40 pounds, and when stacked, frosted, and decorated stood about five feet tall.

Sensitive to the safety requirements involved in making a cake for a United States president, Jackson assembled the pastry masterpiece in a room at Minturn’s Eagle River Hotel, isolated from the general public. Every utensil used to bake the cake was sterilized before use. Only Mrs. Jackson touched the cake. 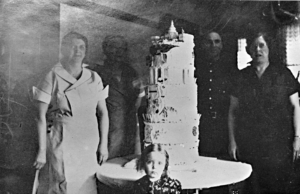 Ruth Jackson with others and the birthday cake

The cake top was topped with a sugar replica of the federal capitol building and flanked by Uncle Sam figures drawn with icing. A written greeting from “The People of the United States” was piped in gold icing on the top layer. The cake’s sides were decorated with frosting flowers representing each of the 48-states, true to color and form. Jackson had written to every governor in the continental U.S. requesting a color photo of their state flower — and every state responded.

Photographer Jim Buchholz was summoned from Eagle to snap photos of Jackson’s culinary masterpiece. The intent was that the photo could be used for postcards. 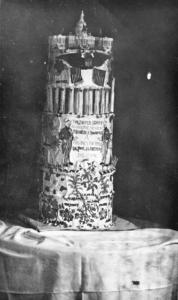 The completed cake was packed into a special wooden crate. Together with the crate, the weight of the cake now approached 70 pounds. The towering cake was loaded onto an eastbound Denver & Rio Grande train, and shipped express to Washington, D.C., accompanied by an unnamed “guard” who stayed with the cake until it was delivered to FDR.

Whether the president actually ate the cake is unknown. But a week after his birthday, Roosevelt sent a gracious note to Jackson, writing: “Thank you very much indeed for the especially fine birthday cake. I more than appreciate your friendly thought in presenting it to me. Very sincerely yours, Franklin D. Roosevelt.”

Eleven months later, Ruth Jackson honored another politician with a culinary masterpiece. In December 1938, she baked a similar birthday cake for outgoing Colorado Governor Teller Ammons, who had recently been defeated in a bitter election by Republican Ralph Carr. Ammons, an advocate of New Deal-type programs, had been instrumental in securing funding for major road improvements for Highway 24 over Battle Mountain in Eagle County. 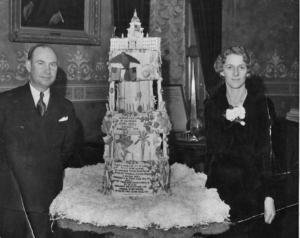 For Ammons, who was the state’s first Colorado-born governor, Jackson created a five-tiered cake with a replica of the state capitol building on the top, and Colorado flowers etched in icing around the sides of the layers. With additional piped frosting, Jackson extended a friendly message:

“Wishing our son of Colorado a very happy birthday December 3, 1938.”

Then she offered a frosting poem:

“Events come and go the lives of all mortal men,

Be whatever their hearth, clan or kin.

But when a life has served a needed post,

Remember it more than talk or boast.

So this token here which surely is not of clay

On this his forty-second natal day.”

Again, the cake (which the local newspaper described, presumably inaccurately, as a “200 pound cake”) was shipped, most likely via train, to Denver. Ruth Jackson had her moment of glory when a photo of Gov. Teller Ammons, his wife Esther, and the towering cake was printed on the front page of the Rocky Mountain News.

In 1940, Ruth Jackson married William Bergquist, the man who owned the rooming house where she and her young son lived in Minturn. In 1942, the Bergquists moved from Minturn to Arizona, citing the need for a location change because of Ruth’s health. Beyond that point, the history of Eagle County’s resident cake-maker gets vague.

Still, this woman with an eighth-grade education, an appreciation of politicians, and a talent for baking made an impact in Eagle County, and had her moment of fame in both Colorado and the United States.

Perhaps it is time to go back to the tradition of expressing our feelings for politicians with cake, frosting, and kindness.

Written and researched by Kathy Heicher for the Eagle County Historical Society, January 23, 2021.