Eagle’s downtown flowerpots overflow with bright petunias this summer. The pretty petals are both decorative and historically correct. Since 1934, the petunia has been Eagle’s official flower, thanks to the forward-thinking and sometimes formidable ladies of the Eagle Garden Club. 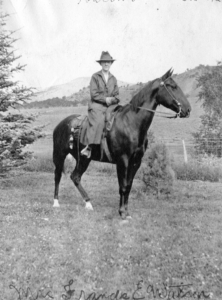 They were community activists, using their flower seeds, charm, and persistence to advance the town. Civic improvement was the primary goal when the club formed in July 1932. Twenty-two women members signed on at that first meeting. The club’s first president was Mrs. George Watson, the wife of a prominent, cattle-ranching county commissioner.

For several decades, the fourth Wednesday of every month was Garden Club meeting day. The women educated themselves by researching and presenting “papers” on topics including the study of plant names, the benefits of birds in the garden, and storing vegetables for winter.

The civic projects started out small. The club transformed an old horse watering trough at the north end of Broadway into summer flower garden. Mrs. A.B. (Laura) Koonce planted flowers and vines, then toted water to the trough throughout the summer to keep the plants alive.

The success of that project led to a competition recognizing the best-kept homes and gardens. The townspeople responded enthusiastically. Small cash prizes were awarded, and pride abounded. 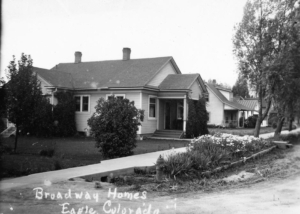 In August 1932, the ladies hosted the first-ever Flower Show in Eagle. They expected limited participation, theorizing that only a few varieties of flowers could be grown at Eagle’s mountain elevation. To the Club’s surprise,  35 contestants showed up with over 57 varieties of flowers displayed in baskets, jars, and vases. The flowers were exhibited with considerable community pride. The Flower Show became a beloved annual affair.

Next up was  a Christmas outdoor lighting contest that the Garden Club initiated with the help of the men (mostly Garden Club husbands) of the Eagle Commercial Club and the Lions Club. The enthusiastic response from businesses and homeowners made Eagle the talk of the Western Slope that holiday season.

The civic projects grew bigger. The new county courthouse lacked landscaping. The Club ladies responded with shrubs, grass, and trees. The Eagle Cemetery was a dusty patch of sagebrush-strewn gypsum soil. Led by Mrs. Caroline Thoberg, the Garden Club ladies spent months working with the Cemetery Association on a landscaping plan. They strong-armed their husbands into providing the muscle. The community effort resulted in the grassy, tree-dotted oasis that provides a peaceful final resting place for Eagle residents today.

Their work went beyond grass and gardens. During the Great Depression, needy families were supplied with generous Christmas baskets. When World War II started, the Garden Club ladies turned their attention to salvaging silk, nylon hosiery, and waste fats. They also sewed for the Red Cross.

The women raised money by selling subscriptions to “Better Homes and Gardens” magazine, and hosting luncheons and card parties. The prizes were often flower bulbs. 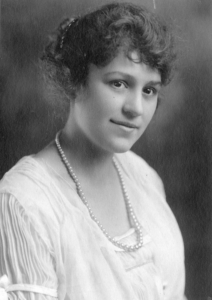 It was not easy to deter the  garden club ladies from an identified project. In March 1934, at the suggestion of Helen Allen (the wife of local bank president J.D. Allen), the Club declared the petunia, something of a floral newcomer to the county, to be Eagle’s official flower. The plan was to plant petunias in every local garden. The Garden Club handled the cost and the labor of planting petunias in public places including gas stations and Broadway businesses.

The petunia decision was dutifully reported in the Eagle Valley Enterprise newspaper. However, the following week, an anonymous writer (most likely Enterprise editor and publisher

Adrian Reynolds) expressed disappointment in the selection of the petunia as Eagle’s flower. He was a fan of sweet peas and suggested that would have been a better choice.

Affronted, the Garden Club ladies did not back down. Their response letter-to-the-editor acknowledged the sweet pea as a beautiful flower but pointed out that the petunias were ideal for many more purposes including porch boxes, flower beds, borders and rock gardens. The women also noted that petunias come in many varieties, blossom from early summer through frost, and could be wintered indoors. Also, the town of Aspen had already claimed the sweet pea as its official flower. Nobody likes being second.

Duly chastised, the editor meekly declared his intent to plant “a solid bed of petunias this year.” 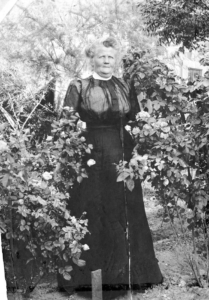 Despite their many good works, the women of the Eagle Garden Club probably never got the recognition they truly deserved. True to the social customs of the time, the women were recognized in newspapers or public discussion by their spouse’s names, rather than their own. Even their obituaries rarely mentioned a female first name. Yet, these women figured every bit as prominently in the history of Eagle County as did their husbands.

Consider the example of a few of the club’s founding members. Mrs. George Watson (Francis) was a very capable horsewoman, as good as any ranch hand at rounding up cattle. Mrs. Nick Buchholz (Jeanette) served as the superintendent of Eagle County Schools. Mrs. A.K. Ethel (Mabel) was the wife of a county judge (she was his court clerk). When he died in 1933, the county commissioners appointed Mabel to the judgeship … and paid her $20 less per month. Her very first case was a highly controversial and precedent-setting issue involving a sheep rancher trailing his herd across public land designated as cattle range. She presided over the court for over 10 years.

The Garden Club ladies grew more than flowers. They grew a community. And if they were to stroll through downtown Eagle today, they would be pleased.