The Borah Journals: A Chronicle of pioneer life, by Kathy Heicher [published with the permission of Vail Valley Magazine, Winter 2022 edition. Readers can pick up a hard copy containing this article at many locations in the Eagle Valley.]

Jake and Alfred Borah slipped quietly into Eagle County in the early 1880s. They would prove to be among the most influential of Eagle County pioneers. 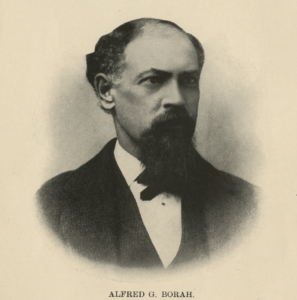 Like nearly every male who arrived at that time, the Kentucky born-and-raised brothers were lured to the Colorado mountains by the Leadville silver mining boom. Within a few years, both brothers moved down into the Eagle River Valley. Alfred, the older of the two, took  up a homestead on Brush Creek (where the Frost Creek golf course is now located) in 1882. In 1885, younger brother Jake settled in the Gypsum Creek Valley.

Although they always prospected, the Borahs were skilled outdoorsmen and soon gained prominence as hunting guides and outfitters. They also market-hunted for the mining camps, bringing in wagonloads of deer and elk meat. 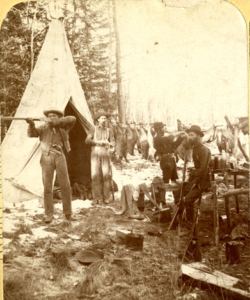 Jake, the more gregarious of the brothers with a particular gift for storytelling, eventually made the hunting guide business his life’s work. His clients included European royalty and wealthy Americans. Jake gained national prominence in 1905 when he guided President Teddy Roosevelt’s Colorado hunting adventure.

Yet it is Alfred, the older, quieter Borah, who will most likely have the greatest impact on local history. A meticulous record keeper, Alfred maintained a journal in which he noted the daily details of life in the late 1800s and early 1900s. He documented details as mundane as the cost of groceries at the general store and as dramatic as Ute uprisings and pioneer murders. And threaded throughout the pages of those journals is a sweet love story and revelations of unexpected tenderness by these tough mountain men.

Borah family descendants recently donated the hand-written journals to the Eagle County Historical Society, which partnered with the Eagle Valley Library District in archiving, digitizing, and transcribing the records. With the click of a computer mouse, the public can now step into the life of an Eagle County pioneer.

Left Leadville Thursday To Prospect the Indian Country. Jake & I Pack up bright & early in the Morning & got to Red Cliff. Bought bill Grub & got down to Jack bridge on Eagle River & camped overnight.

The “Indian Country” that the Borah brothers were venturing into (the Eagle River and Roaring Fork Valleys) had indeed recently been Ute territory. The entire Western Slope of Colorado was Ute territory until white settlers and miners began to covet the land. Starting in 1868, the government negotiated (and broke) a series of increasingly restrictive treaties taking land away from the Utes and dictating where the natives could live. By September 1881, most of the Utes in Colorado had been forced off of their native lands and onto the stark and harsh lands of designated reservations, primarily in eastern Utah.

Treaty terms allowed the Utes to return temporarily to their former territory to hunt. Alfred’s journals reveal that the brothers periodically encountered Ute camps and used those opportunities for trading hides and meat. Alfred also reported on the occasional Ute-settler skirmishes that occurred when the natives ventured off the reservations.

Alfred was a heart-broken widower when he homesteaded 120 acres on Brush Creek in 1882. For several years he notes that his birthday, Feb. 13, marked the anniversary of his wife’s burial. “My Birthdays are not a happy day to me any more,” he wrote in 1884.

Between 1882 and 1885, the Borahs supplemented their prospecting by market hunting, trapping, and guiding tourists on big game hunts. They roamed the Western Slope of Colorado, tent camping year-around. Jake eventually built up a hunting outfit of 75 pack animals, 20 hounds, and numerous wagons and tents.

By today’s standards, the market hunting business is shocking. Alfred’s journal reports that in the 20 months between  May 1882 and February 1884, the Borahs killed 288 deer, 30 elk, 61 bear, 52 beaver, two wild cats (bobcats, lynx, or mountain lions), two rabbits, six ducks, 11 grouse, quail, a bighorn sheep, a wolf, and a fox. 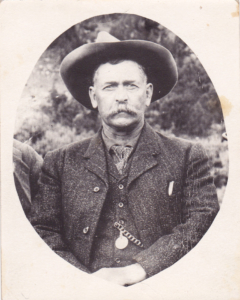 The companionable Jake was known for welcoming visitors to his campfire with  a hot pot of coffee and a sizzling elk, venison, or bear steak. The stoic Alfred managed the finances and recorded business transactions, and on one occasion bailed Jake out of the Leadville jail following an arrest for drunkenness. The brothers constantly bartered, trading game meat for saddles, or horses and mules for furs.

The journals reveal a tenderness for their work animals. In 1884 both men mourn when their favorite hunting dog, Fan, died after giving birth to three puppies. Alfred writes of shedding tears a month later when an old, trusty horse froze to death in a March blizzard.

A serious wagon accident on Tennessee Pass in November of 1886 likely turned Alfred’s focus from hunting to homesteading. Alfred was driving the wagon from Leadville to Red Cliff when it tipped and rolled 100 feet down a steep embankment. The horses were uninjured, but Alfred suffered a compound fracture of his lower right leg. A Red Cliff doctor set the bones after removing several sizable fragments, but for the rest of his life Alfred suffered pain and infections in the damaged leg.

Jake continued to develop the guiding and outfitting business. Alfred turned his attention to making his homestead tract of unbroken wild sage and willows into a fine 480 acre ranch. He raised cattle, hay, grain, and vegetables.

The first mention of Miss Mary Grant, a Leadville woman, appears on July 5, 1884, when Alfred notes that he took her on a horseback ride across Tennessee Park (between Leadville and Red Cliff). To say their relationship developed slowly would be an understatement.

Alfred was still roaming the Western Slope, hunting with Jake. Mary and Alfred exchanged scores of letters, but he often went weeks without being near a post office. Personal meetings were rare, but he did occasionally take her to a dance or on a fishing excursion. He gifted her a saddle and bridle.

1/1 1886 Friday Staid [Stayed] about Town at night went to Dance at union Hall to Club, took Miss Mary Grant had a good time. 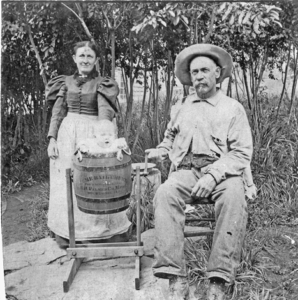 Alfred had a long-term plan, He persuaded Mary’s widowed mother to homestead a parcel of land adjacent to the railroad track at Eagle. He helped build a cabin, barn, and corrals. Once the women moved in, he visited Mary more frequently while her mother chaperoned.

On March 18, 1888, nearly four years after they met, Alfred and Mary shared several kisses (duly noted in the journal) as she strolled on the road with him on a wintry night. In June, he helped Mary file a homestead claim adjacent to his Brush Creek parcel.

In September, Alfred traveled by train to Leadville to purchase a gold engagement ring and delivered it to Mary in a memorable fashion. Alfred was meeting a hunting client in Glenwood, so hopped on the westbound express train. The express train slowed at the local stations but did not actually stop. By pre-arrangement, Mary stood out in her mother’s yard (adjacent to the railroad tracks) when Alfred’s train passed through Eagle. He placed the ring in an envelope and threw it off the moving train to Mary. The engagement was official.

The couple married in a small ceremony in Leadville on April 16, 1889. Alfred dutifully recorded the cost of the marriage license ($3) and preacher ($5). The newlyweds spent one night in Leadville then returned to his Brush Creek cabin. That evening, the “boys of the neighborhood” shivareed the newlyweds­ –– a frontier custom involving  a loud serenade with tooting horns, ringing bells, and clanging pots and pans. The relentless noise ended only when Alfred invited the revelers into the cabin for some generous drinks of whiskey. Alfred was 44 on his wedding day and Mary was 31.

Mary became a true partner at the ranch, working alongside her husband. Journal entries reveal that Mary suffered a couple of miscarriages, but on Dec. 4, 1896, gave birth to a healthy baby girl, Mittie Alda. She was a beloved only child. It was Mitty who preserved her father’s journals, and her granddaughter who donated them to the Eagle County Historical Society.

With his family established, Alfred focused on developing his land into one of the best ranches in Eagle County. He was involved in the community, helping to build the little log school that Mittie would attend, and serving on the school board.  Neighbors knew they could count on Alfred Borah for help and advice.

One year after Alfred’s marriage, Jake married local belle Minnie Hockett. Their adventurous life included operating hunting and fishing resorts at Deep Lake (on the Flat Tops, northwest of Dotsero) and at Trapper’s Lake. They maintained a ranch on Gypsum Creek and raised two sons. Jake’s hunting adventures took him all over the western United States and into Mexico. His famous clients invariably became his fast friends. Jake died in 1929 and is buried in Gypsum.

Alfred’s health issues prompted his family to move to Arizona in 1917. He died in Phoenix in 1923.

Credit Alfred for his persistence in maintaining those pioneer journals, and his daughter Mittie for preserving the fragile books. Eagle County now has a treasure trove of local history that will delight many future generations of researchers. 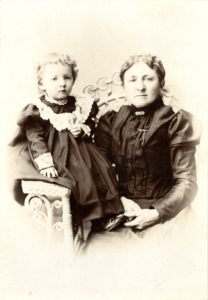 The digitized Borah Journals and photographs are accessible via the Eagle Valley Library District website (evld.org) and at eaglecountyhistoricalsociety.com.

Kathy Heicher worked as a reporter and editor at newspaper in the valley for over 40 years. She is the president of the Eagle County Historical Society and is just completed writing her fourth local history book. Her work has earned History Colorado’s Caroline Bancroft Award for contributing to the advancement of Colorado history. She is the go-to person if you are seeking gossip of 1890s Eagle County.