These days most down-valley locals associate the name “Abrams” with a street in the outer reaches of the Eagle Ranch subdivision, or a challenging mountain bike trail in the adjacent open space.

In reality, the Abrams family was among the first homesteaders in the lower Eagle Valley. As a group, they exhibited pioneer pluck, daring and ingenuity, and a dark streak of violence. More than once, the deaths of family members were attributed to what the newspapers of the day described as “unnatural causes.” Indeed.

David A. Abrams, the family patriarch, was born to Irish immigrant parents in Philadelphia in about 1847. During the Civil War, he joined the Pennsylvania infantry and distinguished himself with remarkable bravery and fearlessness in battle. As the ranking captain, he led recalcitrant troops into fire in the Battle of Petersburg,  Va., a Union victory that cut off a major supply hub for the Confederates and ultimately led to the Rebel surrender.

After the war, Abrams became a Philadelphia police detective with a reputation for effective work. In 1878, the silver mining boom drew David, his wife Jennifer, and their youngest children (there would eventually be seven Abrams children) to Leadville, Colo. Abrams mined, then was quickly hired by the local police force. His police work sent him to the Taylor Hill mining district on Tennessee Pass to quell a violent mining claim dispute that killed several men. Abrams, exhibiting considerable nerve, secured and held possession of the mines until the conflict could be resolved in court.

Abrams was prominent in Leadville, and knowledgeable about mining affairs. He and his sons had mining in their blood. 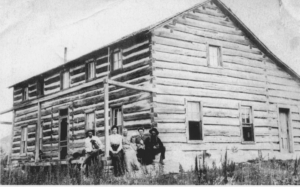 Members of the Abrams family pose at a large log cabin in about 1917. From left are Albert Abrams, Mae Abrams Sheehan, Jennie Abrams, Nellie Sheehan, Loyal Abrams, and Jack Sheehan.

In 1883, Abrams became a rancher, leaving Leadville for a 360 acre homestead on Brush Creek, a tributary to the Eagle River. (The Abrams land included what is now the heart of the Eagle Ranch golf course, and the denser Village Homes housing development.) He and a Leadville physician, Dr. Eyer, partnered on the ranch. Abrams provided the land and the labor, Eyer paid for the cattle and farming equipment. The Abrams family built a cabin about five miles up Abrams Creek, where they also dabbled in copper mining. When the mine proved non-productive, they built another, more comfortable home down at the mouth of Abrams Creek in the Brush Creek Valley. The Abrams sons sometimes stayed at a third cabin, located midway between the two homes. Newspapers described the Brush Creek property as a “magnificent ranch.”

From the start, there were problems with the neighboring land owner, David Sutton, who also claimed a strip of the same valuable ranchland. Sutton succeeded in evicting the Abrams family from their comfortable cabin in the dead of winter, sending them scrambling for a new home. The several-year land dispute went all the way to the Secretary of the Interior. Ongoing rulings favored the Abrams family, according to newspaper reports, but Sutton kept appealing. The hostility between the neighbors was constant. 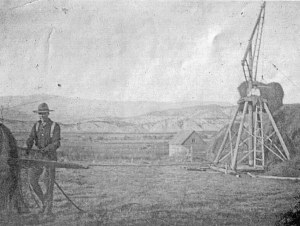 An unidentified man works the field with a Mormon Derrick, used for stacking hay, in the background. The gyp hills of the Brush Creek valley are in the distance.

David Abram’s personal land battle ended abruptly with his unexpected death in September, 1886. The Leadville Herald Democrat newspaper attribute Abram’s death to “unnatural causes,” related to a serious knife wound to his spine suffered a year earlier. David Abrams had literally been stabbed in the back.

The origin of that knife wound will forever remain a mystery. No reports of the original incident can be found in the newspapers of the time; yet the stabbing seemed to be common knowledge. The Abrams family and friends would not talk about it.

“Those who are familiar with that tragic affair declare it to have been an accident and preferred to have no reference made to it,” noted the Leadville Herald Democrat on Sept. 18, 1886.

The infected knife wound rendered Abrams increasingly feeble over the following year, eventually causing his death at the age 45. Where David Abrams is buried is unclear. 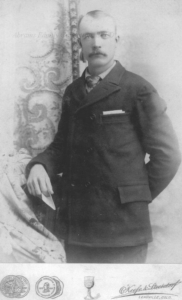 The incident started a couple of days previously when Abrams turned several of his horses out on the disputed strip of land, which was fenced. Sutton, a bachelor rancher, gathered the horses and secured them in his barn, refusing to give them back until the courts issued a final ruling on the disputed property. Sutton demanded legal documents showing proof of the land possession and insisted that Abrams pay for the damages.

Newspaper accounts of the incident conflict. Sutton and Abrams definitely argued. According to one account, Sutton advanced toward young Abrams with a sledge hammer. A different report suggests that Abrams may have been the aggressor, threatening to kill Sutton if he touched the horses. Sutton kept advancing toward Abrams, who drew his revolver and fired twice, hitting Sutton in the stomach and then in the left eye.

Bill Abrams immediately went to a neighbor’s house and turned himself over to the authorities. Fearing mob violence, Constable Ed Thompson avoided taking his prisoner to the Eagle train depot for transport to the county jail at Red Cliff. Instead, the constable and the suspect walked up the valley to the next rail stop.

Sutton was a prominent player in early Eagle County. He had recently been elected Eagle County commissioner, but had not yet taken office. His remains were taken to Denver where he was buried in Riverview Cemetery in the White family plot (the Whites also homesteaded on Brush Creek, and Sutton was Sarah White’s cousin as well as the White ranch manager).

In June 1888, a grand jury in Leadville indicted Bill Abrams for first degree murder. He awaited trial in the Leadville jail, where a stream of friends visited him, offering support. The local newspapers sympathized with Abrams, describing him as a “quiet, inoffensive-looking young man, with flaxen hair and a small moustache of the same color, with nothing about him to indicate the desperado.” The newspaper flatly states that the Sutton killing was self-defense.

Newspapers did not report the result of Abrams trial, but the course of his life afterwards suggests that he was acquitted. A marriage in 1895 ended in divorce less than two years later.

He volunteered for the Spanish-American War in 1898 achieving the rank of lieutenant during that 10-month conflict. Shortly afterwards, he was reported to be living in Crestone, Co., a small mining camp in the San Luis Valley.  By 1901 he was in Defiance (now Glenwood Springs), mining with his brothers.

Bill Abrams was not destined for a happy life.

On Jan. 1, 1911 Abrams was blinded in a dynamite mishap inside a lead mine in the cliffs above Shoshone in Glenwood Canyon. Five months later, he was declared insane and sentenced to a stay at the asylum in Pueblo, Doctors blamed the loss of eyesight and damage to his brain.

By 1912, Abrams was out of the asylum, and out on the streets of Denver, selling newspapers and flowers from a stand outside the Montview Hotel. He made headlines in August of 1912 when he wrote a letter to the warden of the state penitentiary, requesting that that the eyes of a condemned murderer be harvested immediately after the fellow’s hanging. Abrams believed he had a doctor who could transplant the eyes and restore his vision.

“I’d go through hell to regain my sight, and no operation, however painful, would deter me from taking the one chance I have had to be able to see,” Abrams told the newspapers.

Abrams’ sight was never restored. Blindness led to his death in Denver in September, 1920. He became disoriented, and stepped into an open hotel elevator shaft, apparently mistaking it for a door. He fell three stories to his death. Bill Abrams is buried in a family plot at Rosebud Cemetery in Glenwood Springs.

Jennie Abrams, David’s widow, married William J. Paye, a road overseer, in 1899. They continued to ranch the Brush Creek land, along with the younger Abrams children. In April 1908 she was granted a divorce, with the newspapers noting that her husband was a fugitive from justice and did not contest the lawsuit. 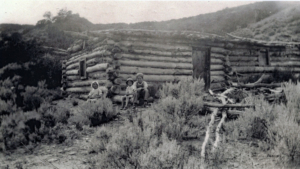 In 1924, William Mayer, who had been ranching in the valley for about 25 years, purchased the Abrams property. In his memoir, William’s son Chet Mayer raised some interesting stories about the Abrams family.

Mayer could remember a double grave up Abrams Creek, well-marked with a board fence around it. The story he heard as a child was that the stepfather (possibly Paye) and one of the Abram’s sons got into a fight while cutting timber. Both raised axes and attacked each other. One reportedly died from a split skull, and the other bled to death from a severe wound in the neck and shoulder.

However, another Eagle pioneer, Ernie Nogal, offered a different version of the story, saying an Abrams son came upon his stepfather beating his mother, and buried an axe in the man’s back. The son died a few weeks later while swimming … or, another version of the story suggests he was poisoned.

Mayer also repeats a rumor that perhaps Bill Abrams was a hired gun, whom local ranchers used to take care of cattle rustlers, and may have been the person who murdered the outlaw Charlie Johnson in 1901.

None of those rumors can be verified by archive research, and the stories are likely a mix of miss-remembered history and flat-out rumors. If there are twin graves up Abrams Creek, nobody has seen them in decades. 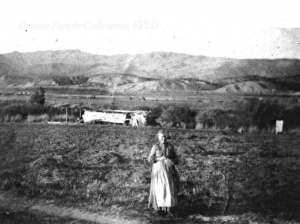 Jennie Abrams outlived five of her seven children. She spent her life on that Brush Creek homestead, dying in 1924 at the age of 78. She is buried alongside several of her children  in the family plot at Rosebud Cemetery in Glenwood Springs.

Photos are from the Abrams family album and are shared courtesy of the Eagle County Historical Society and Eagle Valley Library District.