One of Eagle County’s earliest and most successful pioneers, ranch owners, managers, and businesspersons was a woman. 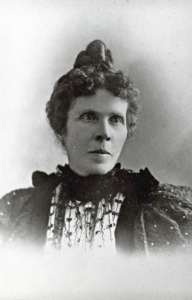 Sarah Morton White Kempf spent her first twenty two years in Platte County, Missouri.  Born in 1847, she lived a settled, luxurious life on her parents’ farm, and then in Platte City with her husband and first child.  She began the pioneer life in 1869, when she and her husband left Missouri for the new Territory of Colorado, traveling by rail and stagecoach.  They settled in Golden, where their second child was born.  By 1877, they moved further west to Georgetown, and after the birth of their third child, they relocated to Leadville in 1879.  Pregnant with her fourth child, Sarah and her three children temporarily moved to Denver in 1882 to escape the severe Leadville winter, her husband visiting the family when he was in Denver on business.

In the early 1880’s, after a discussion of their future, the security of their family, and how Sarah would provide for her children should something happen to her husband, they journeyed from Leadville to Brush Creek, most likely on horseback, where each filed homestead claims on one hundred sixty acres.  At the time, only two other families were living in that area.  A bachelor cousin of Sarah’s was asked to come to Colorado and file on an adjoining 160 acres, which they purchased after the requirements of the homestead law were met.  This gave them 480 acres for the start of a ranch, located on what is now the Eagle Ranch subdivision.  A cabin was constructed on each of the claims, and the claims were each fenced in.  Sarah’s cousin remained on the ranch, while Sarah and her family continued to live in Leadville.  The cousin grew hay and grain for the horses and some produce for his own consumption. 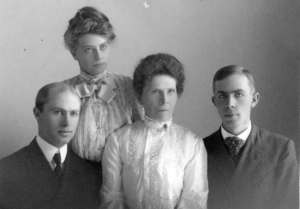 Then, in January of 1884, Sarah, 37, became a widow, with four children ranging in age from two to 16.  Knowing that the ranch must become a profitable business in order to support her and the children, she entered into the cattle business by purchasing a sizable herd of Texas longhorn cattle.  By the time her cousin was murdered in 1887 by a neighbor over a land dispute, she moved from Leadville into one of the three cabins.  Concerned with educating four children in a remote location, she sent her oldest daughter to a convent in Montreal, Canada to be educated by the Sisters of the Sacred Heart, and the other three children to Notre Dame. 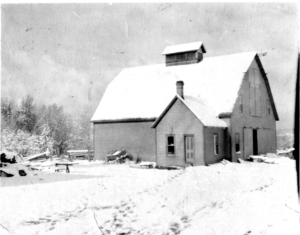 Barn on the Sarah White ranch

Until the railroad reached Eagle in October 1887, she arranged to have the cattle driven 60 miles to the nearest railroad point.  Workers, including miners, prospectors, cowboys, and ex-convicts, were hired to do the hard and heavy work on the ranch.  Although she carried a pistol and slept with it under her pillow, she never had to use it.  Eventually she married the man (19 years younger than her) who had been the ranch foreman.

She purchased another ranch on Brush Creek, 10 miles away from the original ranch, on Salt Creek.  Her SW – branded cattle, considered to be one of the finest cattle herds in western Colorado, had improved from Texas Longhorns to Shorthorns, grazed on the open range, and drank from natural freshwater springs, and a creek.   By 1903, the Glenwood Post referred to her as “the owner and complete manager of one of the largest and best ranches in this country” and added “as a businesswoman she stands a peer and puts most of the sterner sex to shame.”

Still living in the cabin built around 1882, her financial status now allowed her to build a new home and workable out-buildings.  A nine room house with two baths, a parlor, living room, fireplaces and a furnace was completed in 1905.  Unfortunately, Sarah died in October 1905, at the age of fifty eight.  She was buried in Denver’s Riverside Cemetery, next to her first husband. 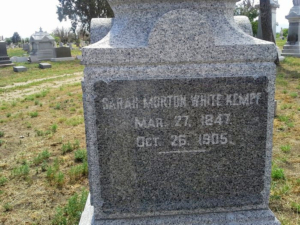 Undoubtedly, Sarah also contributed to the successes of her first husband, George Griffith White and her sons Benjamin Morton White and Hume Stanley White.  To learn more about these men in Sarah’s life, check out family memoirs and photos in the digital archives at www.evld.org, and the April 2020 blog on Hume White at www.eaglecountyhistoricalsociety.com/hindsight.com.

Family memoirs and photos in digital archives of www.evld.org